A New Jersey father and his four daughters are all dead after a pickup truck crossed a highway median and struck their minivan in Delaware — leaving only the mother alive.

“We will never see them again,” the dad’s brother sobbed to The Post.

The family had been heading north on Route 1 Friday en route to their home in Teaneck following a Fourth of July holiday trip to Ocean City, Md.

The southbound truck crossed the grassy median and struck them near the northern Delaware town of Townsend.

Dead are Audie Marquez Trinidad, 61, and his daughters — Kaitlyn, 20, Danna, 17, and 14-year-old twins Melissa and Allison, relatives and friends said.

“How are you going to bury five people at the same time?” Trinidad’s brother, Daniel, asked tearfully Saturday after rushing from Miami to the family’s neatly landscaped three-level house.

“There’s no answer,” he said. “If anyone knows the answer, call me, text me. God said there’s a plan. What’s God’s plan now?”

The father’s and daughters’ bodies were in the morgue and unrecognizable, he said.

The mother, Mary Rose Ballocanag, 53, a nurse at Beth Israel Medical Center in Manhattan, remained hospitalized Saturday with multiple fractures but was expected to survive.

She knows her entire family has been wiped out, Daniel Trinidad said of his sister-in-law.

“Right after the accident, she called her friend,” he said.

From her hospital bed, Ballocanag cried to her friend, “They’re all gone,” he said the friend told him.

“Now my sister-in-law is all by herself,” Daniel cried. “What will she do? This is like a tragedy 100 times over.” 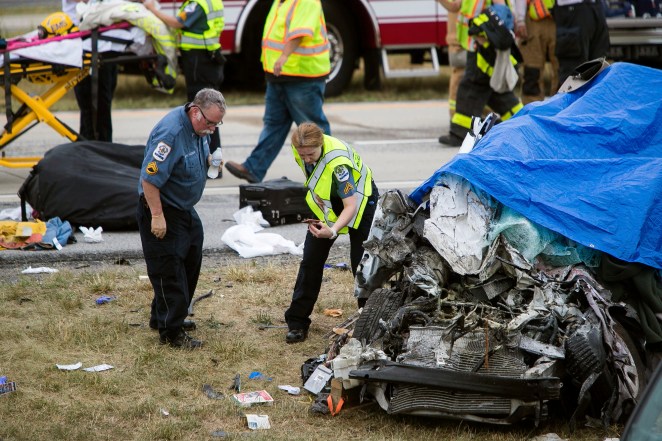 AP
The pickup driver — said to be a 44-year-old man from East New Market, Md. — was treated at a hospital and released, police said.

Officials did not immediately reveal his name or that of his 30-year-old male passenger. They also did not say why he crossed the median of Delaware’s major north-south highway or whether driver impairment was a factor.

The maroon truck — a commercial vehicle with an extended cab that was still at the crash scene on Saturday, its passenger side caved in — — had been heading south when it veered into the northbound lane, straight into the path of the oncoming minivan.

The truck was still at the crash scene on Saturday, its passenger side caved in.

A large decal on it reads “Aledak Metalworks,” a metal fabrication shop owned by Donald David Robbins, whose age and address fit the police description. He could not be reached Saturday.

The white minivan, also still at the scene Saturday, had massive front-end damage.

Its roof, apparently cut off by rescue workers, was lying upside down on the ground nearby.

The father and mother had been wearing seat belts; at least some of the daughters were not, police said.

“I’ve been in the business 28 years,” said Larry DuHadaway, an off-duty firefighter who saw the crash and joined in the rescue.

“It’s the worst one I’ve seen,” he told Delawareonline.com. 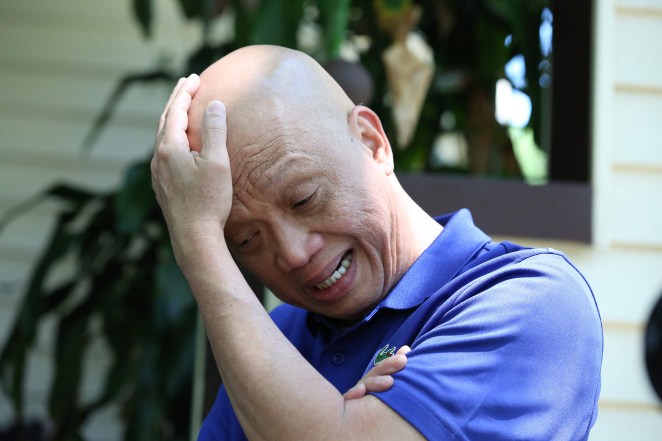 Daniel Trinidad, brother of Audie, reacts to the deaths of his sibling and nieces.
Angel Chevrestt
DuHadaway had been driving four cars behind the pickup when it clipped a white sedan, then became airborne as it struck the median.

The pickup then crossed into the northbound lane, perpendicular to opposing traffic. He said the Trinidad family’s minivan could not avoid T-boning the truck.

DuHadaway, a paramedic, said there was little he could do.

“I felt kind of helpless, to be honest,” he said.

The family had just spent the Independence Day holiday feasting on Maryland crabs.

“My brother texted me a picture of the blue crabs they ate on the Fourth of July,” Daniel said.

“My brother sent a before and after picture of the crabs,” he said, showing the text messages to a Post reporter.

“Here they are,” he said pointing to the photo of the crabs.

“And here it’s gone, all gone,” he said, pointing to the photo of the empty crab shells.

The brothers’ mother lives with the family in Teaneck but was visiting her native Philippines, Daniel said.

“I don’t think she can handle it,” Daniel said.

“They’re a God-fearing family. They go to church,” he said.

“My brother was a loving husband. He’s the oldest of eight siblings. He could not say no to his wife and would always give to his daughters,” he said.

“Every summer, they went on field trips, Orlando, Six Flags. I would joke and say, ‘You’d do anything for your family. Your wife asks, and it’s always ‘yes.’ ”

At one point in describing the victims’ many virtues, Daniel paused.

“Now I know the answer why this happened,” he then said.

For the Maryland trip, the family waited to go until the eldest daughter, a nursing student, finished her semester at the College of Mount Saint Vincent in The Bronx. Danna, the second oldest, was going into her last year of high school.

The twins, who turned 14 on June 17, had just finished eighth grade.

Neighbor Tahir Abbasi, 44, woke Saturday to the sound of his daughter crying loudly in the basement. The twins were her best friends.

“The dad worked really hard,” he said. “The mom took them everywhere. She was the soccer mom. They were very excited to go on the trip.”

Another of the father’s brothers, Nelson Trinidad, 48, also shared the Teaneck house with his own family.

“We always eat together,” he said. “I always drop the twins at school every morning before I go to work.”

Breaking into sobs, he added, “I’m going to miss them so much.”